RANZ Commercial Roof of the Year 2022

Te Pae Christchurch, the Garden City’s impressive new convention centre, has risen from the rubble of its predecessor. For Graham Hill Roofing, its roof presented an immense challenge and an opportunity to showcase their skills and experience.

Many non-Cantabrians look to the region’s folk with admiration, awe and respect for their resilience in surviving the catastrophic 2011 earthquakes. For the most part, though, Cantabrians seem eager to move the conversation on and look to their future. RANZ members have made significant contributions to the roofing rebuild efforts.

For the future of Canterbury, perhaps one of the most significant is Te Pae Christchurch Convention Centre – a new, state-of-the-art facility that will serve not only the region but the whole of the country. Te Pae Christchurch
replaces the original Christchurch Convention Centre, demolished in 2012, having been irreparably damaged in the earthquakes. And as if the rebuild itself wasn’t enough to grapple with, along came COVID-19. It was initially scheduled to take 1.5 years to install the roofing and related systems, a year into the roofing project, the COVID-19 pandemic hit. This saw the complexities of the project mount and the timeline blow out to three years. But, as of the start of 2022, the centre is now open for business. Te Pae Christchurch is estimated to bring in $60 million a year for the region. With an investment of $450 million, the return outlook so far seems promising with a busy events schedule booked for 2022 – including hosting this year’s RANZ Conference in June.

The finished product is impressive, perhaps looking more like a giant sculpture than a building. Inspired by the rivers of the Canterbury Plains with patterns and colours in the tradition of Ngāi Tahu, the design was co-created by architects Woods Bagot and Warren & Mahoney, with close consultation with Matapopore Charitable Trust. The striking façade, consisting of steel framing and concrete-based tile, was installed by Alufix. Behind that and on top, however, is where the team’s work at Graham Hill Roofing (GHR) sits – “the important stuff,” quips GHR operations manager, Zach McKay. Zach oversaw the demanding project, which required numerous design solutions from the GHR team. The project ended up having 85 variations in total, “[variations] documentation was coming through daily”, says Zach.

Before getting to site to commence installation, Zach, along with Glenn Milroy, GHR Business Development Manager, engaged in an extensive series of meetings over 12 months in preparation. The team met with project managers CPB contractors in conjunction with key supplier RoofLogic. RoofLogic has an experienced in-house design and engineering team, which enabled them to design a bespoke warm roof system solution for the project. “One of the key performance requirements related to the acoustic performance of the roof system,” explains Graham Tennent from Rooflogic.

“Managing sound reverberation within the auditorium spaces required the use of our deep-section, perforated liner tray, and targeting a rating around STC 60 required a build-up with multiple layers of Rooflogic’s high-density Stonewool and Acoustic Board.” The extensive facilities include a 1000-seat banquet hall, 1400-seat auditorium, vast exhibition space, and 24 meeting rooms.

Kicking off from October 2018, the roofing, cladding, flashing and installation of the internal gutter systems of Te Pae Christchurch was a full-time job for three years for key project team members from GHR. This included foreman Tyson Wormington and site manager Dylan Frapwell, along with their membrane specialist for the internal gutters, Ernesto Mandoza, and Tyson’s Leading Hand, Karl Tritt. Tyson credits Karl, who he says “helped big time and made my job a lot easier.” At any one time, GHR had up to 20 people onsite through the roof installation period, with the internal gutters, in particular, taking the most extended amount of time.

Dylan was ‘on the tools’ for one month as an original foreman from the project’s outset. Then, due to the demanding scale of the build, Tyson was brought on board, with Dylan taking on the site manager role full time.
After working for GHR for ten years (six years as an employee and four years before that as a contractor), Te Pae Christchurch was an opportunity for Dylan to step up. It was also a great learning opportunity for Tyson to work on a project of this scale. He moved down from Wellington to join the GHR team with 17 years of roofing under his belt.

During the project’s three years, Tyson can rightfully boast that there was only one injury on his watch, occurring while safety procedures were correctly adhered to. One guy reached down to get something that had fallen into the safety nets and popped his shoulder out. The onsite crane could easily reach him with the rescue cage, and he was back at work the following week.

As expected, head contractors CPB had strict safety requirements in place. The GHR team weren’t allowed to get on any roof until both edge-protection was around the perimeter and drop nets from Safety Nets NZ were all in place. Where the scaffold couldn’t reach, a man-cage off the crane while being harnessed on was required, coupled with a drop-net system in place also.

And of course, the COVID-19 health requirements came into effect from 2020, meaning interaction with other contractors was strictly limited, causing delays and difficulties across the project. For Tyson and the team, this meant no one could leave site once signed in for the day either, changing the work-day dynamic significantly. It’s easy to see how the team got through, though, with Tyson’s calm, grounded approach showing through while reflecting on the project, “…you’ve got to take it day-by-day, and not stress yourself out about things,” he says.

After 12 months of meetings and with their approved roofing solutions, the team had to install five different roof types. The plant rooms (x5) that sat on top were the most straightforward, with traditional commercial style iron, battens and paper – not requiring the high R-value acoustic performance soundproofing of the others because they sat on top of them. This part of the job made up 3800sqm of the team’s efforts.

The high-performance RoofLogic systems made up most of the roofing. There were four separate Rooflogic systems, each designed to meet the facility’s performance requirements or various spaces, covering 10,881sqm. Logistics and installation methodology was significant and a daily challenge for the GHR team.

The main central roof covering the auditorium, exhibition hall, and meetingroom areas are around 500mm thick and use RoofLogic’s acoustic build-up system. The system here consisted of a top deck of 0.55mm metal Topdek T, followed by roof underlay. Then the four layers of Stonewool were sandwiched between two layers of the acoustic soundboard, with a vapour control layer before the bottom board, and then an acoustic sound blanket with a perforated liner cassette. The rest of the roofing areaswere variations on this system, with a portion of the Administration area was roofed with a Fibretite membrane top deck layer, as used with the internal gutters. With so many materials for each layer, there was a lot of rubbish to deal with during installation. Every second day or so, the team had to spend a few hours having it craned down and sorting the waste into the designated bins onsite for recycling where possible.

Overall the team installed 14,681sqm of roofing. On top of this, they crafted 670m length of insulated membrane internal gutters. The team also installed the cladding in Multirib, supplied by Roofing Industries. The two aspects of the project that presented the most technical challenges were the internal gutters and the seismic joints. With 85 variations in the project, the team worked closely with RoofLogic to propose solutions at each required step. The team had to propose and then craft their own gutter solution into the RoofLogic system for the internal gutters. A lot of the gutters were built with the structure of the building, but there were some areas where the team had to make it themselves. Working in with the up to 11-layer RoofLogic system, they devised a solution of laying half the RoofLogic system down to connect in; then the guttering was laid on top, meaning no structural changes were required. The membrane top layer used Fibretite, with their membrane specialist Ernesto Mandoza on the application. Waterproofing here was intricate work, made more challenging than it would have otherwise been if they had been able to install it before the roof was laid. The team got the job done well nevertheless.

Naturally, extensive seismic joints were also required throughout the facility, separating off different areas from each other. GHR engaged seismic joint specialists, Construction Specialties Ltd., to help the team. These joints added to the technical challenges for waterproofing around the areas while maintaining the integrity of the
soundproofing also.

The GHR team are happy with the project and proud to have played a crucial part in creating such an iconic facility for the region. With the gift of hindsight, one area that could have had added benefits to the project as a
whole would have been if an enhanced appreciation of the roofing logistics had been held from the outset – and project requirements stemming from that were able to be prioritised and accommodated. Of course, all specialist trades may advocate for their unique importance, but concerning weather-proofing, roofing undoubtedly has a crucial role to play for the best possible success of a project.

Also, with the scale of the build and the sheer volume of roofing material required for the multiple layers of roofing, having a workspace and a system that further minimised double-handling would have brought extra efficiencies to the project, says Tyson. “The team was constrained to build the roof in sections, as the structures were put in place by the builders.”

Not having known each other before this project, foreman Tyson and site manager Dylan now have a strong friendship, with Dylan even having been invited to be a groomsman at Tyson’s wedding. The two were both learning on the job and supporting each other. They very wisely set up a weekly ritual of catching up together after work on Wednesday (payday!) via ‘having a beer’. This helped them get through the project’s challenges while keeping a good working relationship. “That’s probably been the best thing that’s come out of [working on] Te Pae [Christchurch] for me: the friendship,” notes Dylan.

“On behalf of Graham Hill Roofing, I’d like to thank all our staff, sub-contractors, suppliers and design team for their support during the project, and a special thanks to CPB and Ōtākaro for giving Graham Hill Roofing the opportunity to be part of this amazing project,” says Zach. 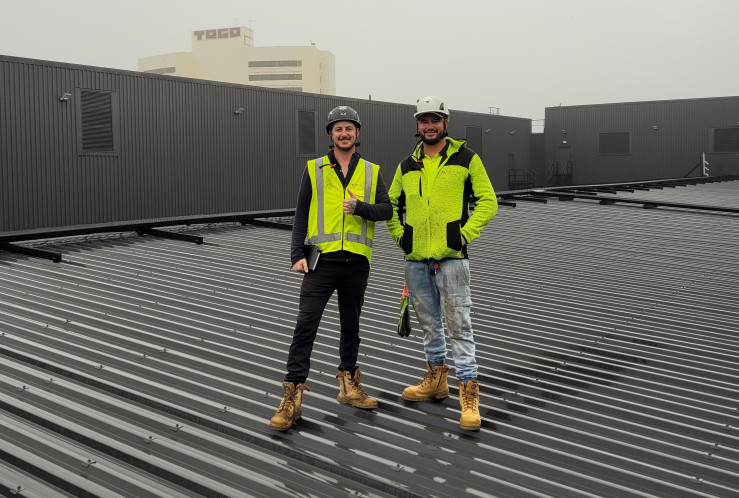